I love nostalgia. Anything that reminds me of my childhood, my school days or university life starts a reminiscing session that often leads to me pouring over old photos and saying things like “life is just different now!”. And fashion nostalgia is my favourite – a quick rummage through the rails of a particularly bad charity shop will have you squealing with laughter and wondering how anyone ever pulled off the skort (answer – they didn’t). I even wrote about fashion nostalgia for Behind The Looking Glass.

When Schuh contacted me to tell me about their 30 Years of Schuh project, I was excited to explore. As well as in-store celebrations, a competition to win an iPad 2 preloaded with 30 years of film and music and collaborations with brands including Clarks, Converse and adidas, Schuh have worked with writer and social anthropologist (Google that job title – it sounds awesome) Ted Polhemus to create a book and microsite covering the fashion, film, TV and music highs (and maybe a few lows) of the last 30 years.

The 30 Years of Schuh site tracks popular culture from 1981 to 2011. All the greats are there – the launch of MTV, Madonna when she was good, Run DMC, The Simpsons, MJ when he was good, the demolition of the Berlin Wall, Take That, Calvin Klein pants, Limp Bizkit (I realise my definition of ‘the greats’ may differ from yours), Sex and the City, Viagra (a definite high… *snigger*), MySpace, YouTube, Obama, Lady Gaga and the coalition government (that’s the low) to name a few. It’s a fascinating to look back at the things that were huge in 1998 but faded into obscurity by 2002 (UK Garage, I’m looking at you).

Anyone who registers on the site can add their own photos to the timeline, and there are lots of cute babies, wild parties and sartorial mishaps. I wanted to get involved too, so Schuh kindly sent me something to help me create a look that represents a specific time period… 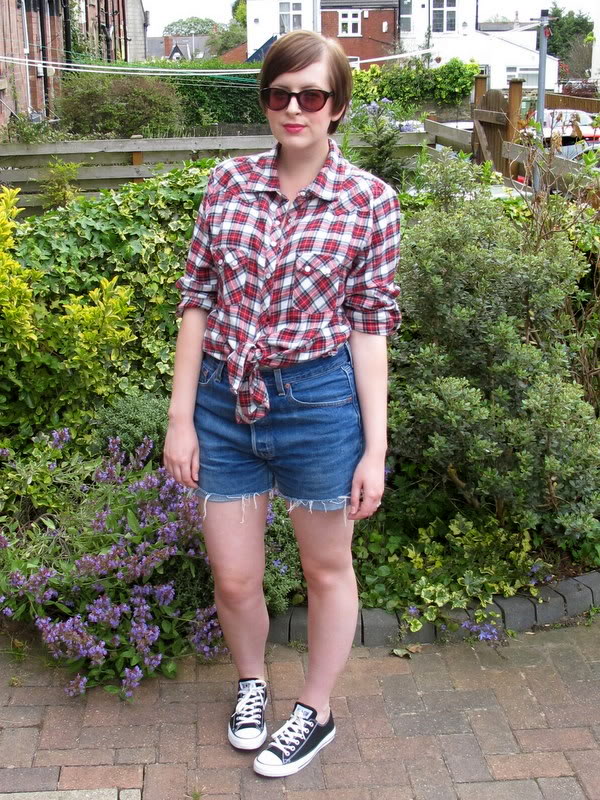 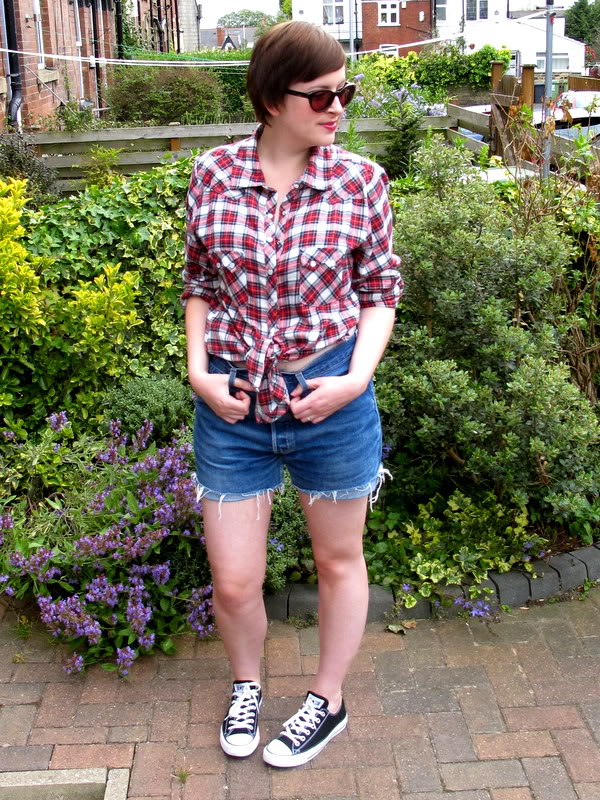 I was born in 1985 so completely missed the fashion triumph that was the 80s. Converse was the official footwear sponsor of the 1984 Olympic Games in LA, and the brand made the transition from sportswear to classic fashion brand soon after. This preppy look is inspired by that active, wholesome American thing that was so big in the mid-80s – think Courtney Cox dancing in the Bruce Springsteen video.

What do you think of 30 Years of Schuh site? Bringing back some memories? Which year is your favourite?

gorgeous outfit! converse are such staple shoes. even though mine are completely battered i will always love them. xx
Ella @ Belle Vintage

Oooh I have that shirt! I don’t own any plain converse, I only have ones with rabbits on for some reason, but I think I’m going to have to get a pair or two!

Hi you look pretty sensational! What a fun way to celebrate the passing of shoe years!Must check it out! Do check my Robbie Williams post of you get a moment I would value your feedback. Sharon xx (UK)

Sounds like this was a great opportunity! It’s amazing how much style has changed (and not changed) in 30 years. Great outfit.

“Madonna, when she was good” love it.
That site has brought back some memories! Love the styling of the converse, never think to wear with shorts but I’m going to give it a try!

Sounds like a great project to be involved in. I’m such a sucker for nostalgia. For me it’s the late 90s. Remember skousers? (skirt/trousers) I wore mine to pieces! I also went through a pretty massive leopard print phase thanks to Scary Spice, hmmmmm.

Love the outfit, you look really cool!
I want to get my self some black converse trainers. I have cream high tops & ADORE them x

Can’t wait to explore the site! Schuh sounds like they’re doing such fun things for the 30 year anniversary! I definitely need to go instore.

Converses are an iconic shoe!! I love my classic black and white ones, despite the condition they’re no in from ‘over wear’.

I had one Christmas when I asked for (and received) a leopard print pair of leggings, handbag, hair clips and top. I was basically a small pre-teen leopard.

Love the look Jen. I like the 30 years of Schuh initiative, it’s nice to reminisce x