After a thrilling two weeks of Olympic action, this morning I decided to show my appreciation for Team GB with a spot of Union Flag nail art. How fitting, I mused as I set up my painting station – waving them off with patriotic talons. I took a moment to think about how great they’d look as I held my Union Flag tea towel (Ikea, if you’re wondering) aloft, singing along to Spice Up Your Life at the Closing Ceremony. And this brilliant guide by The Nailasaurus made it seem so easy – I mean, it’s just painting lines, innit? Simple. 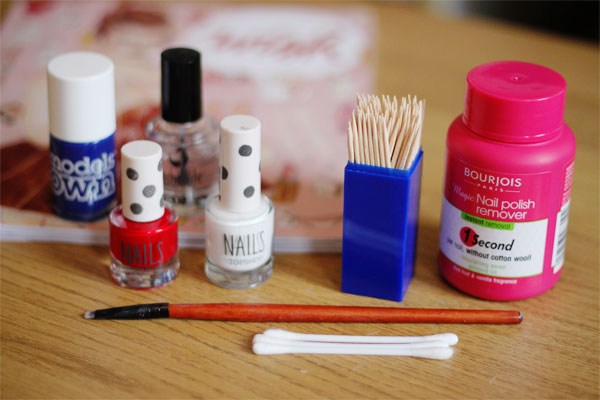 Now, I’m not particularly skilled in the nail art department. Or any kind of art department, come to think of it. I am constantly amazed by the flashy fingers of Kristabel and Gem – at our last few meet-ups, they’ve both sported amazing displays of colour and pattern, whereas I’ve rocked a classic ‘painted-on-train-during-bumpy-bit’ beige style. But I’m nothing if not enthusiastic, so I jumped straight in and started on step one – the white base coat. 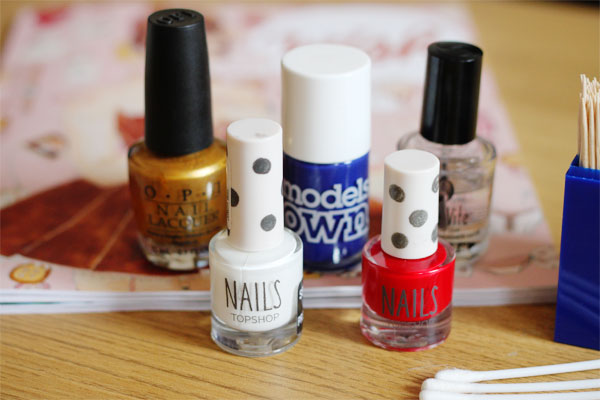 I used OPI, Models Own and Topshop polishes and a Seche Vite topcoat

It started going wrong immediately. Why is white nail polish so HARD to apply? But, with an uneven and streaky base in place, it was time to attempt the red cross. Now, I don’t know if regular nail artists are just more highly evolved or if they’ve trained their finger muscles into total submission, but I found it physically impossible to draw a straight line on my own nail. My crosses looked like the work of five year olds let loose on the living room walls. Crooked, wonky, smudged, too thick – awful. I whipped them off (the Bourjois remover is AMAZING, btw). And started again. And again. And again.

On my fourth attempt my full set of Union Jack nails had been reduced to two ‘accent’ nails and my temper was as frayed as my cuticles. I had crosses. Now, I needed thinner, diagonal crosses. Slowly, slowly I inched towards my nail, gently, gently I placed the brush down, carefully, carefully I moved it across… oh, look at that. Ruined. It took all my strength not to lob the brush across the room and scream like a toddler. 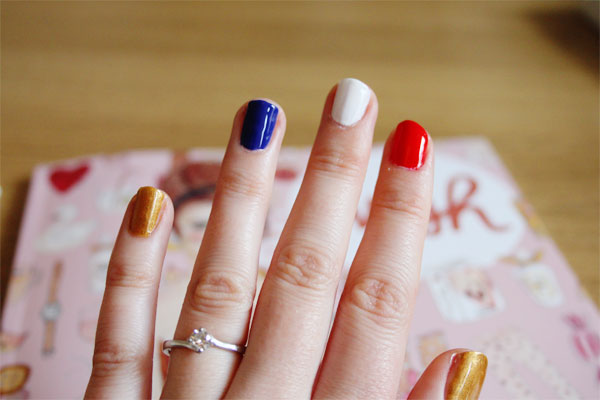 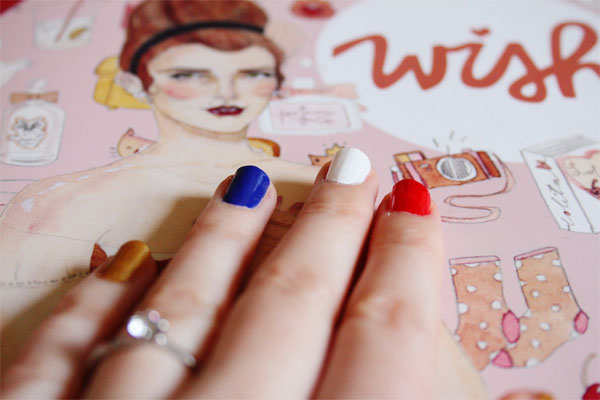 After an hour spent hunched over, inhaling polish fumes, I’d had enough. I painted my nails in a simple red, white, blue and gold sequence and called it a day. Team GB, you’ve been awesome, but my Union Flag nails didn’t even make it out of the blocks. 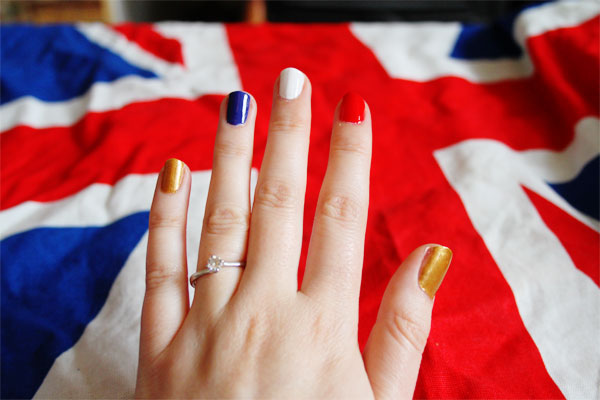 Despite its huge popularity with bloggers, nail art is something I just don’t have the skill or patience for. I love how it looks and will happily sit still while someone else doodles on my fingers, but I’ll hold my hands up and admit – I’m terrible at it. And although I do like how my paired down patriotic nails turned out, I think they’re a bronze at best.

What about you – are you a fan of nail art? Ever created something spectacular on your own fingers? Send me your pics on Twitter!

I just don’t even paint my own nails any more. Seriously considering getting them properly done soon as it’s so tiring and tedious! I just have no patience for it any more, nail polish takes so long to dry and when you think it’s done it isn’t! Understand your frsutration xo

aww atleast you gave it a go! they still look cute though! xx

I have loads of bits and bobs for nail art, but I’m rubbish at painting my nails normally haha, I do need to it them to use tho and have a go…
Xx

a very humorous and great post 🙂 I have no talent in the nail art department so I keep it simple with a coat of polish!

Oh, thank god it isn’t just me! I can’t even paint my own nails without getting it all over my actual fingers…

I am the same my nails always look dreadful! the simpler look you went for still looks lovely though xx

I don’t do nail art either. It’s juts too much. I’m a classic red or pink sort of lass. xoxo

I am also awful at it! But those look fab, especially loving the gold OPI!

I love your nails – to be honest the nail art around lately is so beautiful but at the same time really time consuming and tricky. I love your more laid back attempt 🙂 xx

I love nail art, but I definitely do not have the patience to do it!!

Hehe, I totally feel you. The most I can do is leopard print as it’s not too obvious when you mess it up. As soon as it comes to straight lines, I’m doomed. I once attempted snowflakes, just about manage to do my left hand (right handed…) and ended up begging my husband to draw snowflakes on my right hand nails. Humiliating.

I love nail art and am actually not too bad at it, but I can’t do the simple stuff. Straight lines? Nope. French manicures? Nope. Intricate little trees, clouds and flowers? EASY.

I do love to do nail art and try out new designs 🙂 but these are really pretty! xx

I see that you use Topshop nail polish. I don’t have Topshop in my town so I always order stuff online. Anyway, I’d love to ask you if those nail polishes are good? I mean Topshop’s.
http://coeursdefoxes.blogspot.com/
http://www.facebook.com/CoeursDeFoxes

oh i love this post!
really good!
Love the blog btw, so great, you have amazing taste!
Could you please check mine out please?
would be an honour!
Itsfashiondamnit.blogspot.com
thanks so much! keep up the good work!
Lottie
<3
xxxxx

This made me chuckle! I’m no good at it either, but i highly appreciate a good block colour nail, its classic, timeless and simple! Rhiannon @ Vintage Style Me xx

Hi Jen, same issue as you wonky hand syndrome! Perhaps this could be turned into a new nail design, wavy lines on a dark background??
Sharon

I can´t even put on nailpolish without mess everything up haha 😀 yours looks beautiful!

I am useless at nail art too, these look great though.. I adore the gold colour! X

I love nail art, but like yourself, I’m a bit hopeless at it! Leave it to the pros I say, because sometimes a more ‘basic’ mani like this one does the job just as well! Xo

LOL…well, if it makes you feel any better, that’s exactly how my “nail art” looks too.

Well Jen, I am pleased (well, not pleased, but y’know) that I’m not the only cack handed human that can’t nail art. It just ends up looking like I made a lot of bad mistakes on my nails or that I painted them drunk!

I love your nails! I am equally bad at nail art (even the styles everyone swears are really easy like polkadots) so I totally give up with that, but red, white, blue and gold? I think even I could manage that!

Maybe for the Paralympics!

I love different colour nails. I am not particularly brilliant with nail art but I do like to have a go. I learnt how to do leopard print nails off Superscrimpers on the TV. That’s fairly easy as it doesn’t matter if your a bit messy!

Wow glad it’s not just me. I struggle with dots! Straight lines, it just aint gunna happen. I will sometimes give it a try and then get annoyed but give it a few more days I will go back and have another go but again fail! Your nails do look very patriotic 🙂

I attempted Olympic nails, but stuck with random dots, a lot easier to hide mistakes! I love classic simple nails though so I think what you ended up with looks great!

Nail art is never going to be one of my skills, in fact my bitten nails are so short it would look ridiculous anyway. Loved this post, very funny xo

Hey ‘Little Bird Fashion’
I love nail art – i’ve done a ‘how to’ to create the union jack on my brand new blog: blondiesstlyefix.blogspot.com

check it out! And please follow back/comment, to show some support. I’ma huge fan of your blog – its amazing!

I can’t manage it either. I tried polka dots, inspired by Gem’s kirby grip trick. Yeah…didn’t go so well…

Loved this post. I just run out of patience with it, I do a pattern on one nail, get bored, paint one on the other hand and paint the rest normally.
I don’t know how they do it!