I’ve been dipping in and out of the 5:2 Eating Plan for about a year now. Initially I lost 1.5 stone, then I relaxed a bit and just enjoyed all the food. For the past few months I’ve been dabbling with 5:2 again – not particularly to lose weight but to try embrace a healthier lifestyle. Alongside the eating plan I’ve also been doing ballet, pilates and a bit of running, all of which make me feel a million times better and happier than sitting on the sofa eating pizza. Although I still do the latter quite often.

The thing about 5:2, though, is it gets really boring. You develop a routine of meals that you know fit into your 500 cal allowance and just cycle through them week after week. As someone who loves food but isn’t particularly skilled in the kitchen, I found myself craving more complex tastes but not really having any idea of how to make them healthily. So I did myself a solid and bought a Spiralizer. 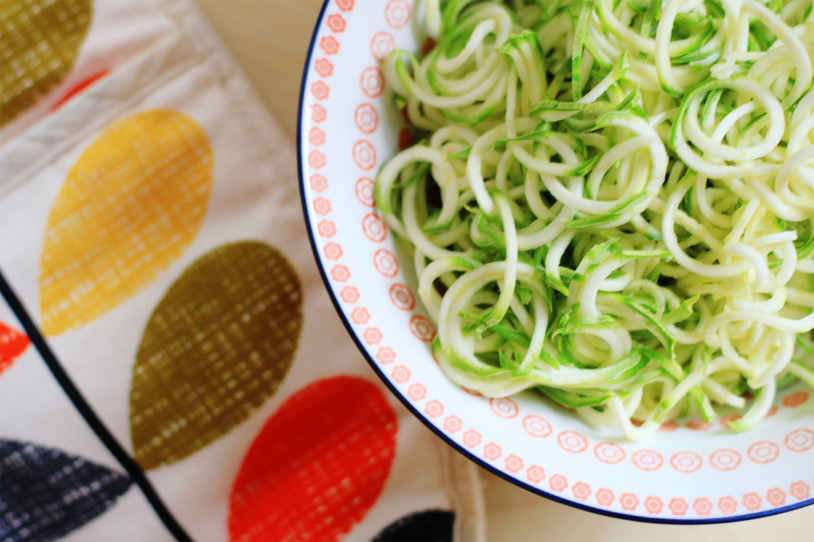 A Spiralizer is a mind-blowing little gadget that turns vegetables into pasta. Stay with me on this. You wedge your veg (this should be their official strapline, I know) into what looks like an old-timey clothes dryer, turn the handle and your chosen blade will slice, dice or spiralize your veg into perfect pieces. AMAZING.

I’ve only had my Spiralizer a week or so and it’s already revolutionised mealtimes in the Allison household. I’m a huge fan of comforting, carby pasta dishes and as they’re so quick and easy to cook, it’s pretty much all we live on when life is busy. By replacing actual spaghetti with this ‘courgetti’, the calories are instantly slashed and my favourite hearty dishes fit nicely into my fasting days.

Not convinced? Here’s a recipe so simple you could do it with your eyes closed. Although don’t, because you might slice your fingers off. 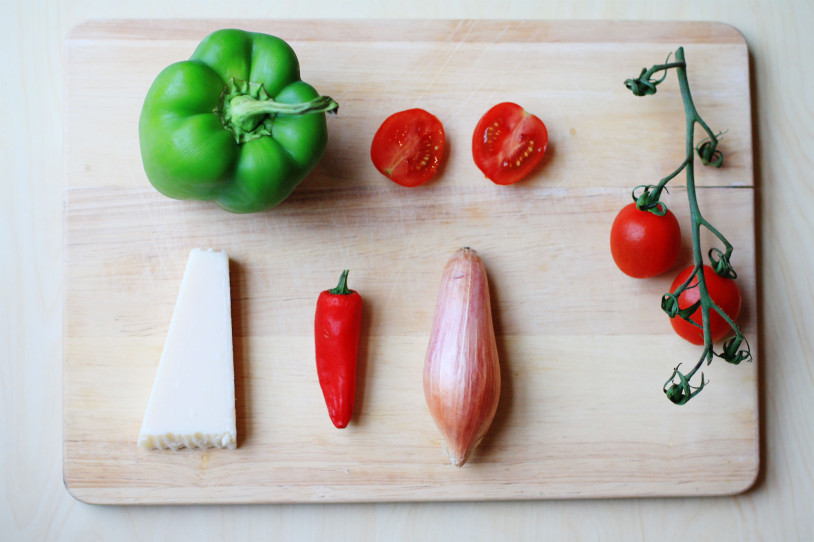 First, spiralize your chosen veg so you’ve got a nice bowlful as shown above. Courgettes, carrots, sweet potatoes and aubergines work best as they’re long and thin so lend themselves nicely to spaghetti-style spirals. Next, gather whatever you’ve got lurking in the vegetable crisper – I found a green pepper and a red chilli – and chop them up along with a shallot, some ripe tomatoes and a few cloves of garlic. Then, locate some cheese (I went for parmesan) and a tin of chopped tomatoes. 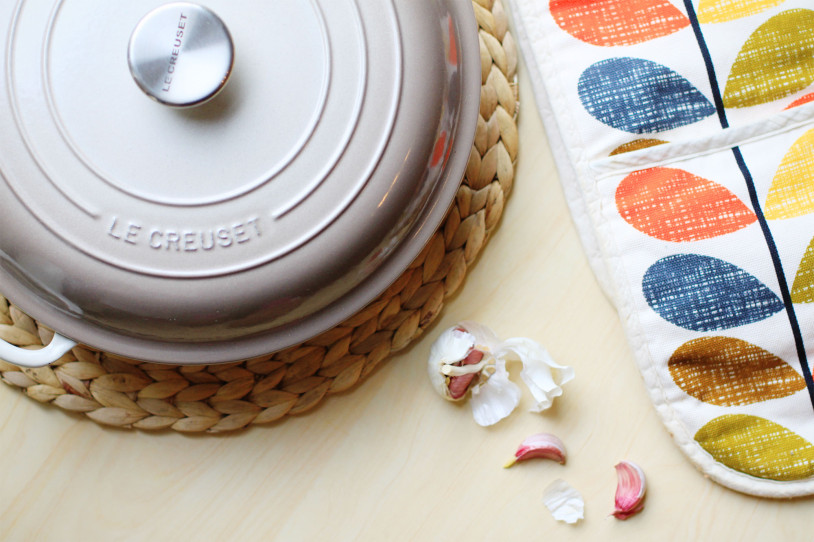 Add your onions and garlic to a big pot with a splash of oil or Fry Light. My big pot is from Le Creuset – bought at my lovely friend Lil’s cookery demonstration a few weeks ago – and used for cooking literally everything.

Cook your onions and garlic until brown, then throw in the rest of your veg and the chopped tomatoes. Simmer until the sauce begins to thicken, then add some seasoning – I used salt, pepper, some dried chilli flakes and a bit of oregano. Give it a taste and tweak until you’re happy, then add your spiralized veg and give it a stir. 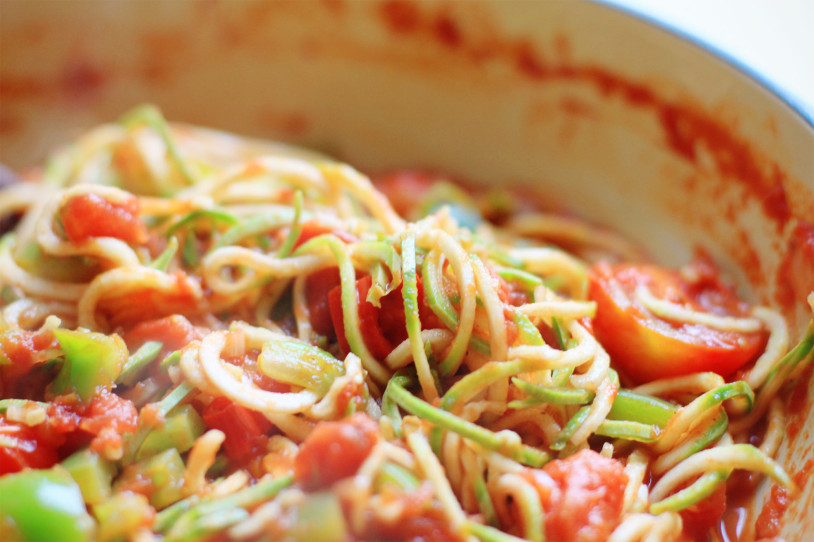 When you’re happy with the sauce-to-spiral ratio, plonk your big pot on the table (on a heatproof mat, obviously) and dish out some bowls so your guests can feed themselves. I’m a big fan of doing as little as possible when it comes to cookery! 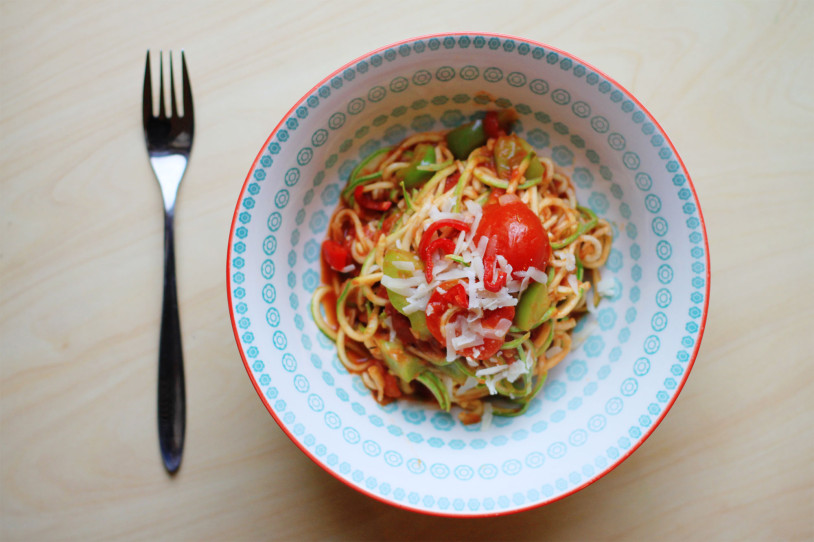 When served, sprinkle some grated cheese over the top and dig in.

This whole recipe takes around 20 mins to prep, cook and serve. The vegetable spaghetti is crunchy and fresh and has none of the heaviness of wheat spaghetti, but is still bursting with flavour. It’s the perfect meal to serve before heading out for the night or exercising as it’s so light and nutritious, and I worked this out at about 190 calories. Good stuff!

Have you tried ‘spiralizing’ veg?

I’m a terrible cook but have perfected my courgetti and love it as a quick and easy meal. x

This looks so tasty! I need to try this 🙂 I now need one of those spiral thingys, sounds fun! xx

I’m a recent convert to courghetti, as is Tom. He hates mushy veg so this is perfect for us as we love carbs and comforting food. Great photos and I would thank you for the Le Creuset link but my bankcard will not. 😉

I’ve been meaning to try this for a while! I ideally want a cheaper, smaller spiralizer though and i’ve seen a few on Amazon.

If you don’t want to buy a spiraliser then consider getting a julienne peeler – does the same thing (albeit more manually) and costs a fraction of the spiraliser!

I need to try this, my grandparents grow marrows and courgettes so I would have no lack of produce to practice on!

Yum! I need to get me a spiralizer!

Yummy! defo have to try and make it!

I am an obsessive healthy eater, I seriously need this! Where can I get one? x

Love your blog so much! I have followed:)
If you don’t mind me asking, what camera do you use to get such brilliant photos?
Thanks!
-Lauren xoxo

this looks super tasty! you’re tempting me to get one of those spiralizers…

I have been trying 5:2 too – and failing for the same reason – boredom. Like the look of this though!

[…] the sauce, I stole THIS TOMATO RECIPE from J-for Jen because it looked pretty hard to fuck-up. It was chopped onions fried with garlic, […]

Yum Yum, just made this, added paprika and cayenne pepper, was absolutely gorgeous. Could not tell it was not pasta, brilliant

[…] Italian nosh doesn’t have to be calorific. Nope, simply replace carb-loaded pasta with shredded courgette. Food blogger J for Jen shows you how. […]

Thanks for the recipe. I was going to cook my courgetti separately then top with sauce but this looks like a better idea…made some nice meatballs in tomato sauce so not as slimming as your recipe but I’ve got two greedy guys to feed.