Now, I know what you’re going to say. Fajitas are literally the easiest thing to make ever ever. No one needs a recipe.

But, this is an Anti-Recipe! It doesn’t follow conventional rules of cookery, like using proper utensils (who said a plastic water bottle couldn’t be a rolling pin?) and licking the spoon (bloody Nigella). So here it is – my Anti-Recipe for everyone’s favourite ‘I’m-so-tired-and-can’t-be-arsed-with-anything-else’ meal, chicken fajitas. 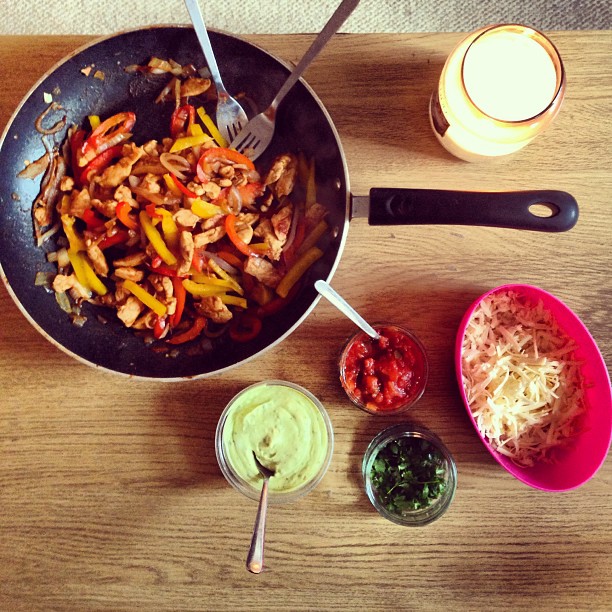 You will need:
– Two chicken breasts
– Two peppers (avoid the green ones, they’re not as sweet)
– One onion
– Fajita paste

Get cooking:
– Cut your chicken into thin strips, heat some oil in a frying pan and throw it in to brown. While that’s happening, cut your peppers and onion into similarly-sized strips.
– Add the peppers and onion to your pan and mix everything about a bit. Add two dollops of fajita paste (or those packet spice mixes) and a splash of water. More mixing.
– Wrap your tortillas in cling film and shove in the microwave for 2 minutes. If your microwave is broken (or you’re just feeling fancy), wrap ’em in foil and pop in the oven for 10 minutes.
– Chop your coriander, grate your cheese and decant salsa, guacamole and sour cream into pots. As an aside, I know it’s much better (and cheaper) to make your own salsa and guacamole, but I’m incurably lazy about such things.
– Serve your fajitas from the pan (use a heat-proof mat, kids!) and encourage the kind of ‘social eating’ they do in the Old El Paso adverts. 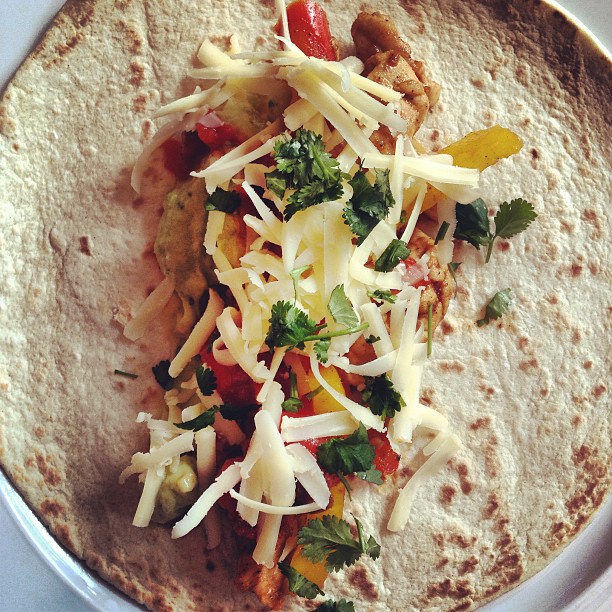 On the subject of Old El Paso, it is sometimes cheaper to just buy a fajita kit, which includes tortillas, salsa and spices. Generally I don’t like buying things in packets but as all the other ingredients are fresh and the packets are usually on offer, I often choose this option over buying it all individually. And I have zero guilt. Nigella can suck it.

What do you think – another Anti-Recipe triumph or a waste of time because you can read the back of the box?

Yum, I love fajitas! Trimuph! I don’t like packets either x

These look so good! Making me hungry :p x

Mmm I really fancy some fajitas now! Agreed about buying the kits, especially if they’re on offer. My boyfriend and I rarely finish a whole box so it tends to last us two meals which makes it a tad more economical!x

That looks really good! I think I’m definitely going to give it a go, the last time I used an Old El Paso cooking kit I thought it looked easy, but two hours later I was getting cranky. Yep, two hours. It could only happen to me.

first of all i have to say that your blogs title is amazing. i love it. second your pics are amazing!!!especially those seems to be very testy!! check out mine if you like we can follow each other. xoxo

Looks delish Jen! I’m a lazy cook, so i’ll most definitely try these when I get back to university!
IN MY SUNDAY BEST

I love fajitas but I actually think the packets can be more expensive.

Hi Anon, glad you like the blog (wish you’d left a name… I don’t bite)!

your blog is normally great- why are you doing recipes? you clearly can’t cook if you use all that pre-made tasteless crap. ‘fraid this post is far from a triumph-posts about clothes and travel a million times better. Don’t think this is your forte, lovely.

Thanks for your thoughts. I can cook, but am lazy and don’t find it enjoyable. The fact that cookery ‘isn’t my forté’ is the whole point of this post. I want to prove that bloggers don’t live in magical wonderlands where everything is rosy and photographed perfectly. Sometimes, we eat packet fajitas and that’s ok.

Sorry if that didn’t come across. Glad you like my blog generally – maybe just tune back in for the clothing/travel stuff?

I love reading your lifestyle blogposts, what happend to you wedding posts/update? 🙂

There will be more wedding updates, I promise! 🙂

This looks really delicious and will definitely have to give it a go. Definitely more adventurous than my pasta and pesto favourite when I am really tired or even worse a slice of toast. I am not a fan of using packets either, It seems like a waste of money.

Your blog is amazing.

Haha – this is a great post just for the monochrome reactions you get here – those who are jelly and slagging the post off, and those who are singing the praises of chicken fajitas like it’s the next big thing.

I’m almost kind of hoping you posted it just to see the reaction, not because blogging is sometimes bloody hard work and you need some filler!

I, being a terrible wannabe like the second group, say I bloody love chicken fajitas and check my blog out 😉

I like to get people talking! In honesty, I get really bored of seeing the same glossy, highly-edited posts on lifestyle blogs – they make me feel inferior for drinking cheap red wine and eating frozen pizzas. These ‘anti-recipe’ posts are just a cheeky way of proving the life of a blogger isn’t all shallow depth of field and organic mushrooms.

Going to check out your blog right now 🙂

I love these posts; I do enjoy cooking but by the time I get home half the time I can only be arsed to do the bare minimum! Plus, we also have an absolutely tiny kitchen, so you can’t do anything too adventurous because there’s simply not space! And you know, I’m not at my parent’s with a dishwasher anymore 🙁

I have to commend you on this post – not because it was simple food with associated pictures, but because it was refreshingly honest.
I have only been blogging for about a month, and as I’ve been adding different blogs to my reading list, I’m starting to get a little put off by the constant need to glamourise every little thing, especially if it’s a lifestyle blog, which should really account for the normal things we all do too.
Making a dinner that uses a ‘little help’ in the form of a sachet is fine, and it certainly made me feel better about my weeks worth of M&S pre-prepared dinners. And also on this weekends attempts of making cake pops, using a pre-bought cake mix!

Anywho, although my blog is very much la-di-da on everything I could possibly love, I’m sure there will come a day when I want to rant on something I don’t love, and I hope that is okay!