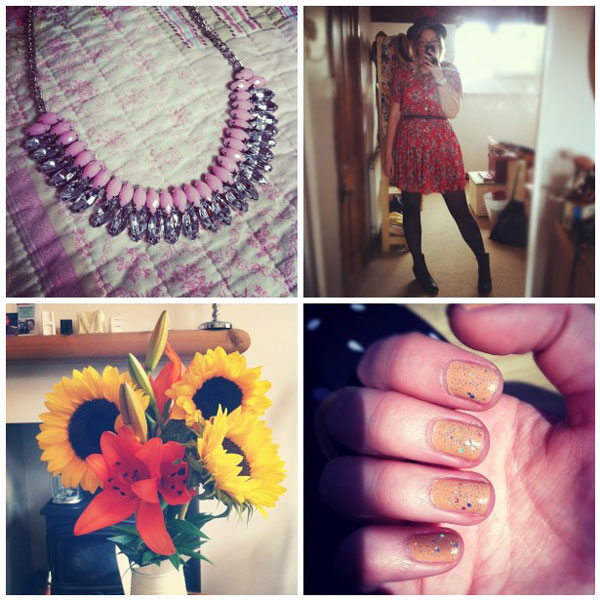 I bought this necklace from Spike the Punch – I’ve wanted one for ages but they sell out instantly, so as soon as I saw designer Elizabeth tweet about a new batch I clicked through as fast as my reflexes would allow. Nothing makes me smile more than shiny, sparkly jewellery.

I often snap photos of my outfits when I don’t have time to lug my tripod down the street for a proper ‘photo shoot’. Here I’m wearing a vintage dress, Topshop hat, ankle boots c/o Sarenza and a Forever 21 belt.

When life gets hectic and I have too much work booked in/an overflowing laundry basket/an endless to do list (delete as applicable), I buy flowers. They cheer me up and weirdly, take away some of my stress.

… as does painting my nails! There’s something quite therapeutic about it, don’t you think? Here I’m wearing Models Own Nyla Nude with a Topshop glitter. 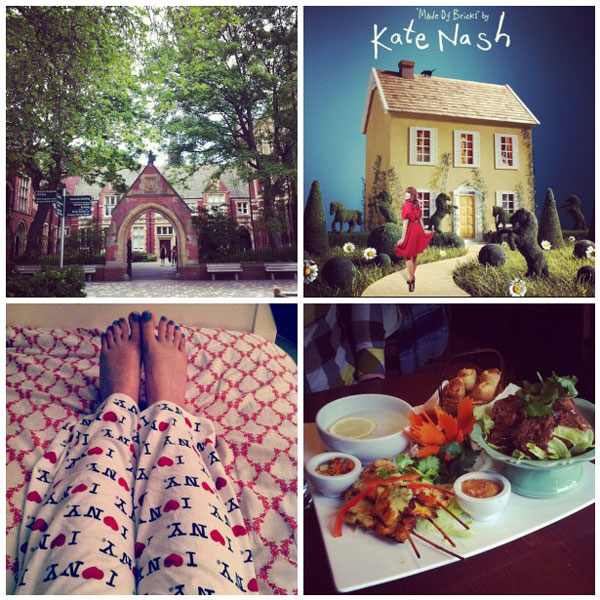 I recently had a client meeting at The University of Leeds and took a few snaps while wandering around afterwards. I live in Leeds but went to The Met for uni (boo, hiss, etc) so this building always enthrals me. It’s just so beautiful!

Kate Nash’s ‘Made of Bricks’ is one of my favourite albums. Not a particularly ‘cool’ choice, but I love her angry girl angst and weird lyrics. Great for my bus journey to the studio, which often causes internal rage!

I bought these PJs in JFK airport on the way out of New York a few weeks ago. I was desperate for an original I <3 NY tee (of which I bought four!) and these managed to sneak their way in as I shopped. Love them.

Sukothai in Chapel Allerton is one of my favourite restaurants in Leeds – I adore Thai food and this place does it perfectly. A bit pricey but utterly delicious… I could go every week! 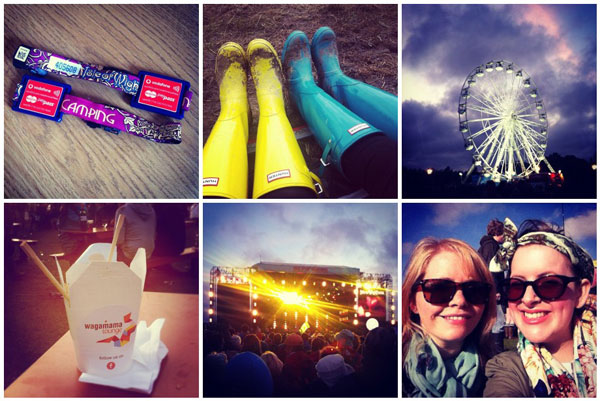 If you follow me on Twitter you’ll know I recently won tickets to the Isle of Wight Festival through Oxfam and headed down there last Friday. My friend Clare and I were panicking after seeing the reports of chaos due to storms – some people spent 10 hours in their cars as the car park flooded and everything went to pot. Luckily we arrived without a hitch, dumped the car in the middle of a very muddy field and headed off to have fun!

The festival site was insane – I’ve never seen mud like it. In some places it reached the top of our wellies and people were getting stuck and falling over wherever you looked. We managed to pitch our tents in a relatively dry area and after a quick welly photo, headed to the Main Stage to catch some music.

We saw some absolutely amazing performances – Example, Elbow, Biffy Clyro, Labyrinth, Professor Green – but my favourites were Madness and Tinie Tempah. Two very different performances which required two very different dancing styles – if you’re not dancing like your Dad when Madness are playing, you’re doing something wrong – but both equally brilliant.

The sun shone, the cider flowed, I ate Yaki Soba while sitting on the grass and we had the best time. Although the weekend ended on a slightly less joyous note, as overnight rain on Saturday created a quagmire in the car park and after waiting two hours, we were jump started and then towed out by a tractor. But we still came out smiling!

So that’s what I’ve been up to lately – how about you?

Looks like you’ve had a lovely week! When I saw you went to the Isle of Wight festival I think I actually thought, “Woah, how is she still alive?”. I think perhaps another case of the media making too much of something, as it sounds like you had an amazing time – apart from needing to get towed out of the mud!

Glad you enjoyed IOW and left relatively unscathed! 🙂
Flowers have the same effect on me, definite mood changer.
x

I went to IOW too but we bailed yesterday after the horrific weather on Saturday night. Tom Petty was amazing! 🙂 x

We totally bailed yesterday too! We left about 1pm on Sunday after our 2 hour wait for the tractor to rescue us from the mud 🙂

Looks so much fun! Glad the mud didn’t get you down at the IOW!

I love your outfit at the top & the pretty nails and necklace! Isle of Wight festival sounded amazing minus all the mud! I lost both my wellies on the first night at Leeds ’08 in the mud & had to find some more, haha XO

Looks like a lot of fun but I would have completely freaked out at the mud!

Looks fantastic, I love your bright hunter wellies….and Kate Nash is amazing, nicest thing is one of my favourite songs ever!! xx

Love your necklace and your outfit. And Kate Nash is one of my favorite artists! Who did you see at the festival?

Hi Rose, we saw Example, Elbow, Tom Petty, Labyrinth, Madness, Jessie J, Tinie Tempah, Biffy Clyro and Pro Green… sure there were more but I can’t remember! All were amazing 🙂

I love that necklace. Looks like you had a great time at IOW despite the mud! I haven’t been to a festival for years, not sure if I could handle one anymore but I do get envious when I see the pics! x

fantastic pictures honey 😉
I hope you have a lovely day

Hi Jen – I too love Spike the Punch! I didn’t think she shipped to UK as Etsy shop only shows rates to US & Canada – am I wrong?!

Hi Anna, she’s only recently updated her shipping options to include the UK. I was so excited when I saw! And it only cost about $4 too which is amazing. Definitely keep an eye out for the next batch of necklaces! x

Love the pics, well done for bagging a necklace!
I am so glad you had a good time at Isle of Wight, I thought of you when the reports were on the news haha!
xx

I heart Sukothai so much! It reminds me of Matt and I’s first dates, haha. So glad there’s one opening in the city centre <3 x