I can cook. Simple things like lasagne and noodles and frozen pizzas (ahem). I don’t eat ready meals every night and know how to poach an egg. But I don’t enjoy it. I hate baking – the huge mess, the multiple tools that need washing up after, the exact measuring. General cooking I can deal with – a girl’s gotta eat – but I’m not really interested in anything beyond that.

However, my constant eating out is putting a strain on my already-stretched (damn you, wedding and house purchase) finances. I’ve decided to try harder to make meals from scratch, and that means using recipes.

I hate faffing about with scales and measuring cups and ‘kitchen stuff’. I use the BBC’s Good Food site as an ‘ideas generator’ and then wing it from there. So here’s my first Anti-Recipe – a meal for people who like to chuck everything in a pan and be done with it. 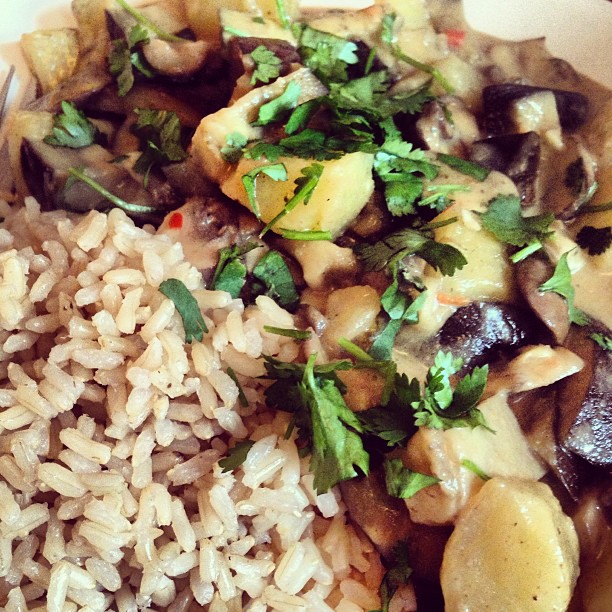 You will need:
– Two small potatoes
– One small aubergine
– About 6 mushrooms (I used chestnut but whatever)
– A can of coconut milk
– 150ml vegetable stock (the only measurement I did actually follow, because stock scares me)
– Garam Masala
– Curry paste

Get cooking:
– Chop your potatoes up into small chunks and parboil them for about 5 minutes until they’re soft. While that’s going, chop your aubergine and mushrooms.
– Heat some oil in a frying pan (the proper recipe calls for a tablespoon, but if you measure out your oil, you need to reassess your life) and chuck in a few teaspoons of Garam Masala. Add your potatoes and cook for a bit, then add your mushrooms and aubergine.
– Add half the can of coconut milk and your stock. As an aside, I CANNOT find small cans of coconut milk ANYWHERE. Plan to make a Thai curry or something the next day to use the rest of it.
– Add as much curry paste as you like, depending on your penchant for spiciness. I went for 3 teaspoons and it worked out pretty well. Another aside here – the recipe calls for Tikka Masala paste but I used Thai Red Curry paste as it was all I had. Worked perfectly.
– Simmer for 10 minutes. In this time I chopped my coriander and put my microwavable rice in, ready to go. I never cook my own rice because it takes ages and is bloody boring, but if you like that kinda thing that you should’ve starting it cooking right at the beginning. Don’t say I didn’t warn you.
– Serve up on warm plates with rice, coriander and a dollop of natural yoghurt. DONE.

I only took one photo while making this recipe – we all know how to chop a potato, you don’t need a photo of it. Plus, I get really flustered when I cook and have zero brain capacity for taking photos. But I think it does the dish justice – it was really tasty and filling without being unhealthy (vegetarian, yo!).

What do you think – is the first Anti-Recipe a success? Will you give it a try?

You can make a yummy sauce with coconut milk, peanut butter, juice of a couple of limes and some chilli powder, if you’re looking for another way to use up the coconut milk. Goes nicely with chicken, prawns, veg, whatever.

Your making me hungry just by the pictures!
Hehe.
Looks delicious

Haha i cann’t understand how you can’t love cooking 😀 Baking is the best anti-stress thing when your broke and can’t shop 😀 good luck 😉
xx
alice-in-fashionheaven.blogspot.com

This looks so tasty. I love cooking, but I’m always less hungry after I’ve cooked, probably not that much of a bad thing though tbh.

I’ve got a M.A.C giveaway on my blog at the minute, would love for you to check it out.

Mmm this looks delicious! I’m all for a bit of improvisation in the kitchen, who wants to spend hours measuring precise ingredients (I’ll do it with cake as its totally necessary to avoid disasters but anything else, life is far too short!)
Kaz at Sunshine Days x

Waitrose sell small cans of coconut milk!! (I work for the Partnership) Perfect size so none left over. Mmm your anti-recipe sounds amazing x

I am so on the same page. I hate cooking but I feel like I need to try.

I’m going to give this a go!

Sounds like a great combo – microwave rice does save a lot of time, I agree xo

Love this blog so much! By the way, maybe we could follow each other on Bloglovin and/or GFC, Facebook?

I love using the BBC Good Food site too. It helps when you read other peoples comments to know if it’s really worth trying out a dish!

I use creamed coconut and mix it with ordinary milk – you get more for your money, and it lasts ages so you’ve always got some handy if you need it!

As this is my first comment on here (although I do read regularly) I should say I do love this blog!

Oh I love baking. Main meals are such a chore though – I’m always knackered and starving after work and never in the mood to spend hours chopping and stirring. I’ll definitely give this a go!

Great recipe, I like to wing it a bit too! xx

I’ve always felt like I should like cooking but I do just find it a hassle a lot of the time. Loving the idea of the anti-recipe. Keep them coming!

This sounds lovely. Going to give this a go. thanks for sharing this recipe.