A few weeks ago the lovely people at Republic sent me a pair of American Apparel Disco Pants. American Apparel is a new addition to the Republic website and to celebrate, they asked three bloggers to take part in a Disco Pant Style Challenge! I’ll have more on that in another post, but for now I thought I’d write a bit about wearing these Grease-esque blogger faves.

When they first started appearing on style blogs, I gave a derisive snort at the thought of ever getting my ass into a pair of Disco Pants. I mean, look at them! Skintight, high-waisted, super shiny… they look like instruments of torture for size 12+ figures. But actually… 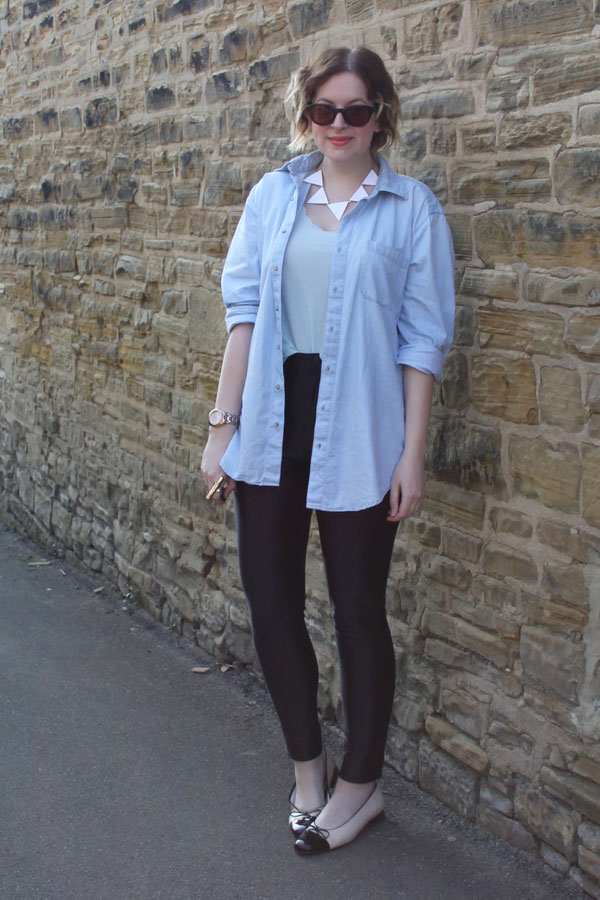 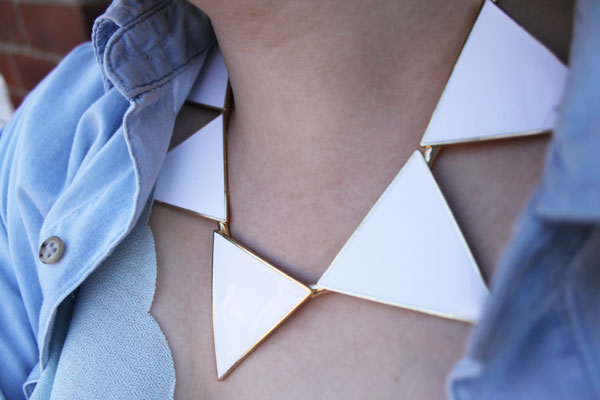 Sadly some of my outfit shots corrupted when uploading but you get the idea. I wear these babies all.the.time. I cannot get enough. Firstly, they are insanely comfortable. They’re nice and stretchy without digging in, making them perfect for lounging about the house (which, let’s face it, happens a lot). Secondly, they are surprisingly flattering. You’d think, given they’re made from high-shine nylon with a waistband that sits above the bellybutton and a spray-on fit, that they’d highlight all your lumps and bumps and create an unforgivable camel toe situation – but no! The thick, heavy material acts like a pair of Spanx for your lower half, smoothing out wobbly bits and creating a streamlined look that’s quite slimming.

I found the Disco Pants to be a little on the small side, so I sized up and went for a large. My only slight niggle is they gape a little bit around the waist but that can be forgiven, especially after a big meal.

I’ve worn them with everything from cropped jumpers to long shirts to tucked in tees, but this is one of my favourite looks. The oversized denim shirt is also by American Apparel – it’s a size small from their men’s range which makes it that little bit longer. Underneath is a pale blue scallop hem vest from Topshop, which is slightly cropped and tucked in at the front. Then I just slip on flats and some jewellery and I’m done. I’ll be wearing something very similar for my 8.5 hour flight to Chicago TOMORROW!

Would you wear American Apparel Disco Pants? How would you style them?

I have been wondering whether to get these for ages – they are such a love/hate thing. You totally pulled them off though!! Think I will get them now 🙂

I hear so many good things about these, sad they’re so expensive! Would look great with a blazer and heels for a night out, although love the casual way you’ve styled them! xoxo

I need some of these in my wardrobe x

Personally not a fan, but love the look on you! Have an amazing time in America! x

You may have convinced me, I was worried about the shine to them (hello sausage legs!) but the fact that they’re quite streamlined is insanely flattering, love this look on you!

I love these! I always feel like the naughty Sandy in Grease when I wear them. You look fabulous in them and love the combo of topping them with a denim shirt.

I love the disco pants, you’ve styled them so well. ! I’m a 12 in trousers and I was worried about how they’d fit but I think I’m going to have to go for it now, they might have to wait till payday though.

I hope you have a lovely time in Chicago!

I want a pair! they look great on you Jen xx

The more I hear about these disco pants, the more I’m so very tempted to get some! They look so fab on you Jen 🙂
Hope you have a brilliant time in America!
R xx

ah they look GREAT on you. i dont think id ever fit it them though.

I realllly love that denim shirt, i’ve been on the scout for one for ages. i may have to invest before i go on holiday

I’ve wanted the AA disco pants for aaaages – the red ones are my fave, though not sure I’d be able to squeeze into them atm!

You look fabulous though 🙂 Love the necklace too!

i’m not usually a big sign of the disco pants, but i seriously love the way you have styled it!!!

A lot of people have said these are surprisingly flattering. I think I need to try them on before taking the spandex leap. They look great on you! Thanks for the ish review. Hannah x

I want them! they look amazing! Thanks for reviewing them!

Really like the outfit you have on, you have styled the trousers really well x

I want a pair of these so much! Love how you have styled them here. I would wear them during the day with a vintage tshirt. x

Interesting..I totally discounted them due to being a 12 + but I may give them a try now. They look fabulous on you.

they look so lovely on you, I soo want a pair of them need to save up for one haha x

Agreed – these look totally scary on the site an I’m always a bit wary of the super-cool hipster American Apparel look, but this really works!xx

You rock these disco pants. Go get America!

you look fab in the pants though!!

I’m unconvinced, but they do look good on you. Please tell me that when you wear them you pretend to be ‘Bad’ Sandy from the end of Grease and strut around saying, “Tell me about it…Stud.” I know I would if I owned those.

They look great on you, and they do look like they’d be comfy. I have to admit that they’re not what I expected when I heard the term ‘disco pants’- I think I had an image of slightly tragic looking flares lol!

They look fab on you Jen! When these first caught the attention of bloggers I dismissed them thinking- ‘only size six girls with pancake stomachs could get away with those!’ But they seem to suit every body shape and size I’ve seen them on, provided they are styled correctly. I may have to invest.. x

Agreed – I LOVE mine.

Hhhmmm that’s surprising because I’ve only ever seen them on tiny girls on blogs… maybe I might give them a go at some point! Then again, I have this slight dislike of American Apparel due to their frankly pornographic advertising…

They look lovely on you, I have had my sights set on a pair for a little while now they seem like a good investment!

DID YOU KNOW? Jessie J wore these for her “Voice” promo in the caramel. Cool?!

WooHooDeal offers you the best daily deals in your City with a maximum discount, from Shopping, Travel and services.Today We’re offering an amazing Deals, Hurry up!, Our Deals are only Live for a short time.
To discover our deals cilck on : http://www.woohoodeal.co.uk/

I love your outfits. They are all so wearable. I always thought you are a American. Just realized that you live in UK. Glad you had a good time in USA.

wow this is greatt
please check out my website i have just started:
http://www.amberhen.co.uk
thank you xx

You may have convinced me, I was worried about the shine to them (hello sausage legs!) but the fact that they’re quite streamlined is insanely flattering, love this look on you!
http://www.apparelnbags.com/mens-polo.htm