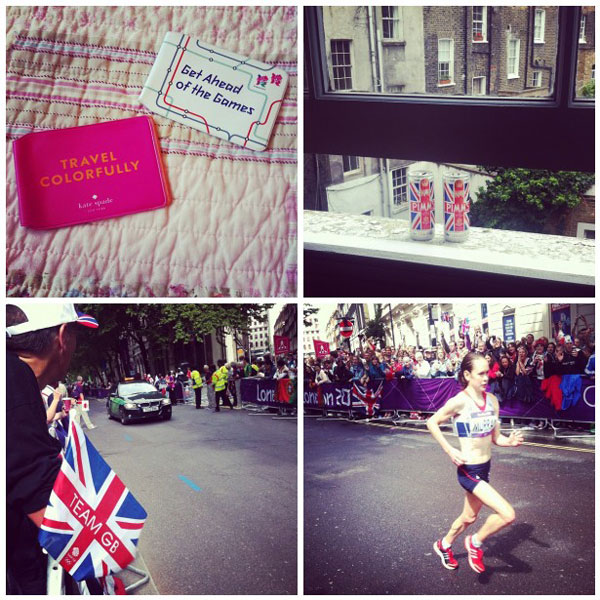 Last weekend my friend Laura and I headed down to London to soak up the Olympic atmosphere. We’ve both become mildly obsessed with the BBC’s Olympic coverage (when you start crying at a man shooting flying purple blobs with a rifle, you know it’s gone too far) and we were determined to see an event in real life, despite having no tickets.

We stayed in easyHotel Victoria – I’ve stayed here a few times and although the rooms are absolutely tiny and you have to pay £5 to use the TV, it’s perfect for a night or two when you’re out and about. Laura was not impressed with the lack of surfaces for our Pimm’s-in-a-can, but we soon saw to that by popping them on the windowsill. Resourceful.

On Sunday morning we took the tube to Embankment (I decided to use my Olympic Oyster card holder rather than the lovely Kate Spade one!) and bagged a prime spot against the barriers to watch the women’s marathon. The atmosphere was amazing – people were laughing and chatting, cheering on every runner, going mad for Team GB and generally being ace. And even when the ‘biblical storm’ hit us, we huddled under our umbrella and waved our flags. 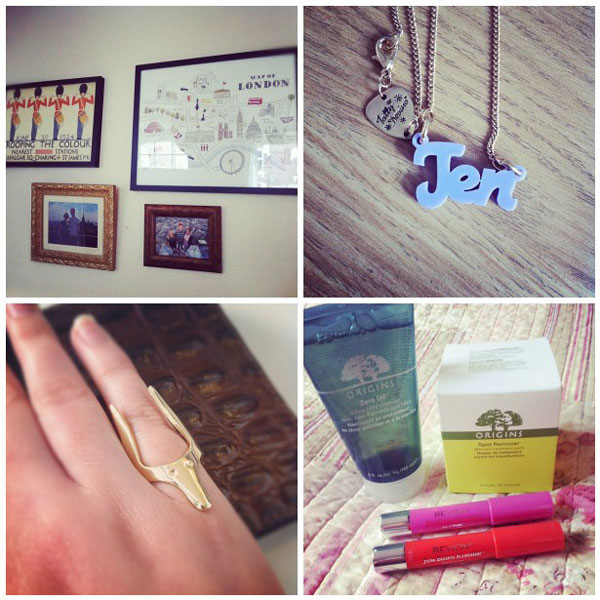 I’ve been trying to watch the pennies recently (saving them for something kinda important next year… my wedding!) so my purchases have been more modest, but I have picked up some lovely bits and bobs.

The London map and vintage drummer poster were both TK Maxx bargains at £14.99 and £9.99 each (and framed, too!). I’m creating a bit of a picture wall in our living room with the theme ‘places we’ve been’ – the photos are of me and Rob at the top of the Rockefeller Center in NYC and me, Rob and his sister Jenn at the top of the Sears Tower in Chicago.

This adorable name necklace was kindly sent to me by Tatty Devine after I missed their lilac launch party in July. I love it! The fox ring was an ASOS sale purchase, such a bargain at £4.50.

Origins products have been all over beauty blogs recently – I’m always looking for solutions to my oily skin, so the Zero Oil range sounded perfect. This is my second purchase of the Deep Pore Cleanser as I love it so much, and so far the Spot Remover is impressing me! My love of Revlon’s Just Bitten Kissable balm stains is already well documented so I won’t go into it again, but man, do I love these things! 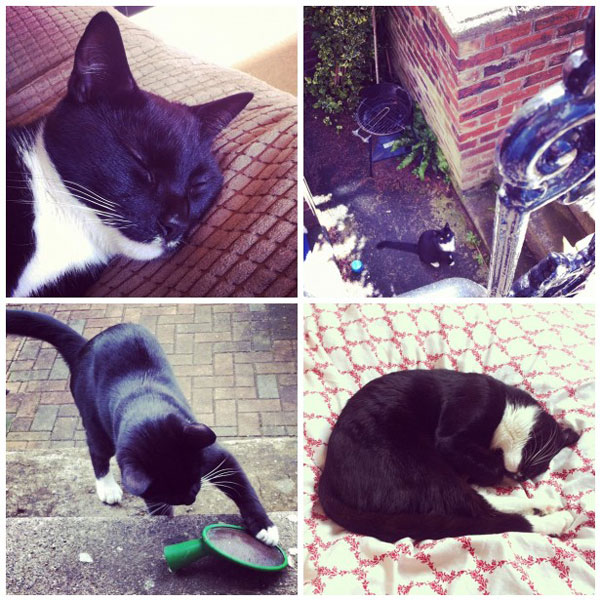 Travis is a year old now – isn’t he just ADORABLE? I can’t get enough of him. What a dude. 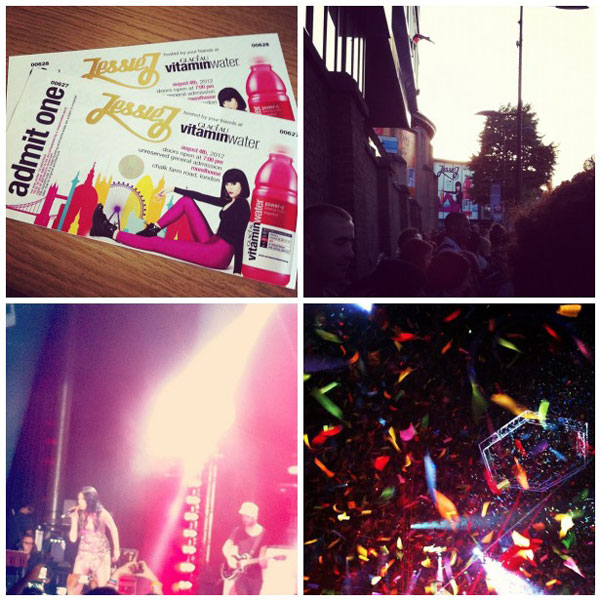 The main reason I was in London last weekend was to see Jessie J perform at the Roundhouse in Camden as a guest of vitaminwater. It was such an amazing show – I’ve seen Jessie J live before and enjoyed it, but she really pulled out all the stops for this. Plus she looked fab in a short, sequinned dress and high-top trainers!

The last song of the night was Domino (a personal favourite and brilliant dancing tune) and as it came to an end, confetti cascaded from the sky and fluttered down around the crowd. Everyone just looked so happy – Team GB had won six golds earlier in the day and people were in such high spirits. I had such a great night – thanks, vitaminwater! 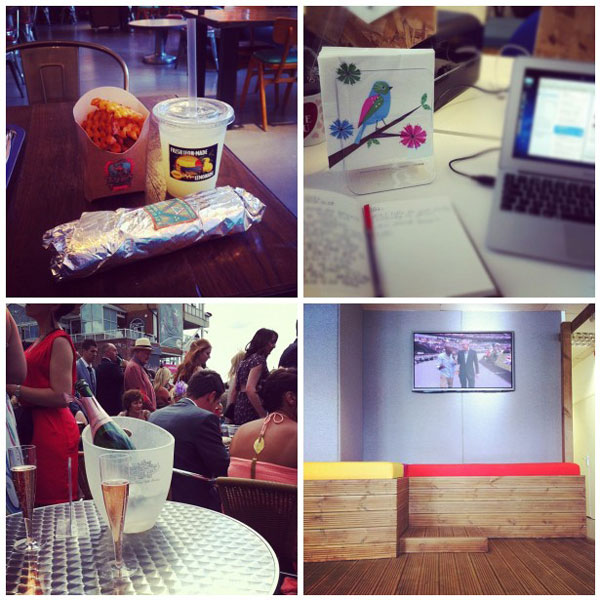 A few final snaps of things I’ve done in the last few weeks – lunch at Leon (falafel and sweet potato wrap, oh my!), working at my studio in Leeds (with a fancy new napkin holder!), pink champagne at York Racecourse with my best friends and watching the Opening Ceremony from the most comfortable beanbags in the world at Duke Studios. Lovely stuff!

that’s very exciting you’re getting married! I wish I was in London right now I’ve always wanted to go to the Olympics, maybe in about 8 years since I doubt I’ll be able to go to Rio for the next Olympics haha.
And that’s so awesome that you went to a Jessie J show. I heard she’s pretty good live.

Your cat is totally adorable!!
You definitely had a lit of fun going on!!
The Olympics just made London more vibrant than it already was!!

Wow your kitty is so cute <3 I’m obsessed with kittens. It must be awesome to be part of Olympics <3
http://coeursdefoxes.blogspot.com/

I love those Tatty Devine necklaces that I’ve been seeing everywhere. Looks like you had a lot of fun at the Olympics! I’m heading up to the Paralympics at the end of the month, I can’t wait 🙂 xoxo

I’m so jealous that you got to soak in the Olympic atmosphere. It truly must be amazing *sigh* I love love love the Olympics. And get all teary eyed whenever the gymnastics are on. lol Beautiful pictures by the way.

I love the necklace!
I’ve been meaning to buy a name necklace for a while now 🙂

Georgia at Just Another Georgia x

Good stuff! I love it when life is full of good things 🙂 Hannah x

Saw a kitten in the window, only a few months old (getting leggy), and it made me think of Victoria’s Ken and your Travis. SO MUCH CUTE xo

The map of London looks so cute! I also love the pimms cans :p

Wow, i’m completly jealous about London! I’d love to go there, but it’s too far from Poland 🙂 and i’m not the biggest fan of olimpic games but I know what you are talking about, in june there was Euro 2012 in Pooland and I watched every single match! It’s great to feel something like this!
Would you like to follow me? 🙂
Xx
Karolajn

I cried when that guy won the shooting too! When he spots his dad in the crowd…aw, I was a mess.
Can’t wait to come to London next month! x

Great buy with the London map – Next Home have something similar at the moment.

I’m loving the Olympics. Have watched it non stop since it started, and I never thought I’d be saying that!

Love this little catch up. Travis is a babe, so cute, and as you know I’m more a dog person.
Also totally in love with the Revlon lipstains. Amazing product, never to be discontinued I hope.
x

Love the London map. You have been very busy 🙂 I’m saving for festivals and my trip to Paris but picked up one or two things in the sales oopsie x