I know I’m approximately 245 years behind everyone else on this, but – I’ve just watched the entire first season of New Girl and I have a huge girl crush on Jess, Zooey Deschanel’s character. So much so that since I had a blunt fringe cut in, I find myself dressing more whimsically, singing what I’m doing and wondering if I can retrain as a teacher. 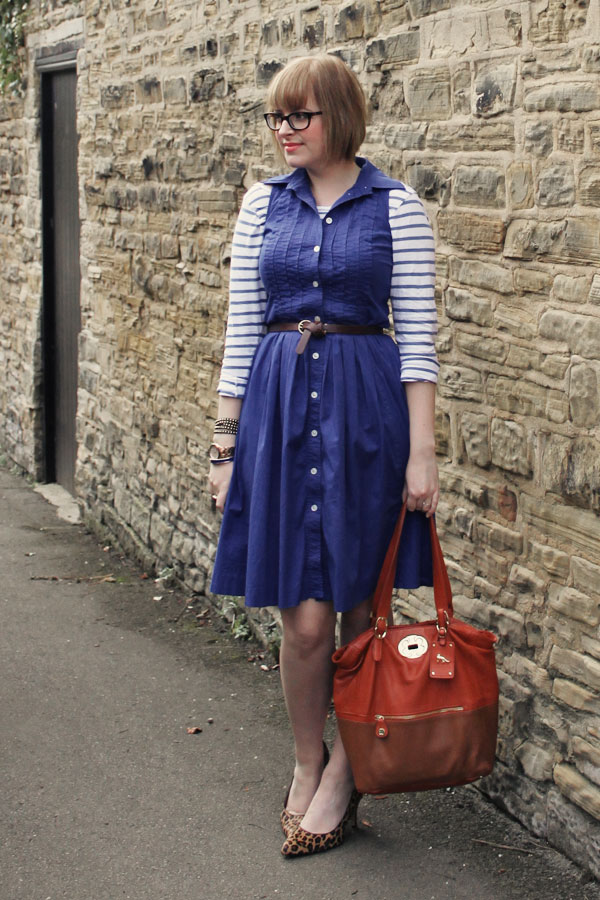 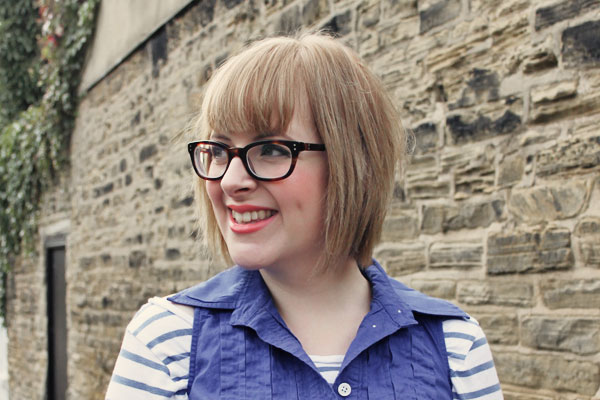 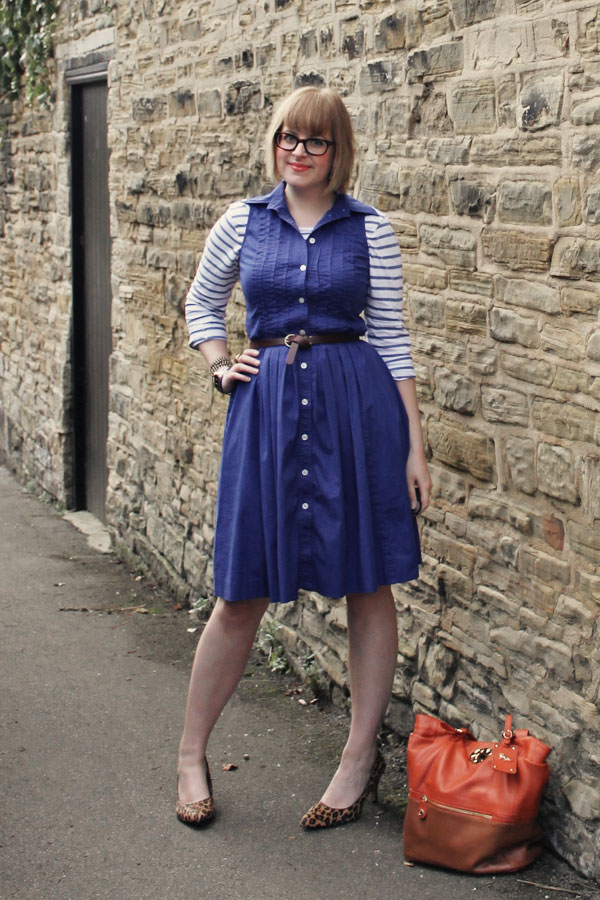 My style has always been influenced by TV and film. I remember watching the first Twilight film (don’t judge) and loving Bella’s simple, slightly grungy outfits so much I dug out my Converse and bought a job lot of grey marl t-shirts. When I was a teen my style went from strappy vests and knee-high boots a la Buffy to band tees and army jackets like Daria. And earlier than that, I had a very unfortunate obsession with tartan kilts thanks to Cher. 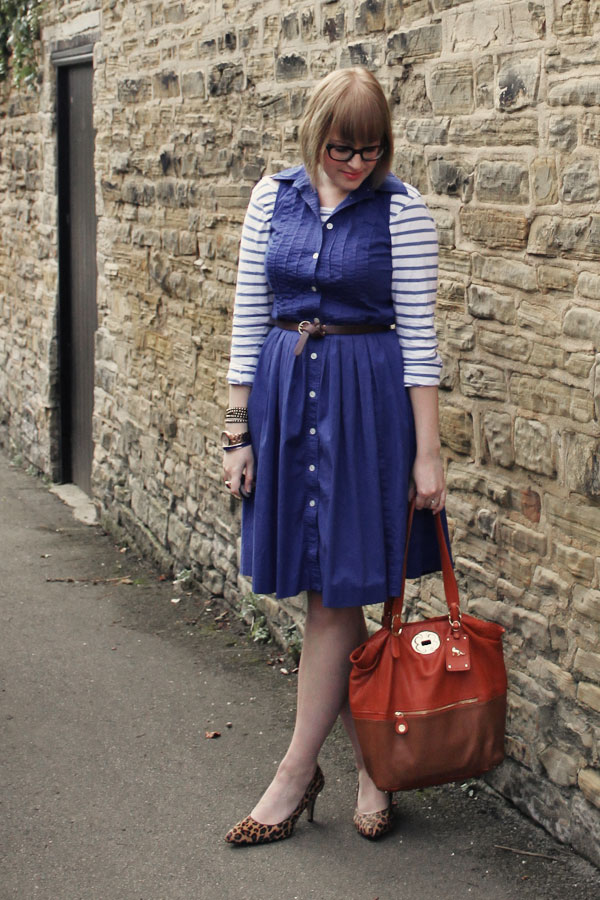 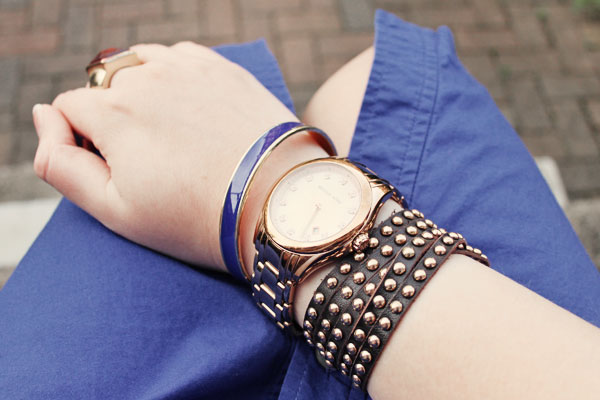 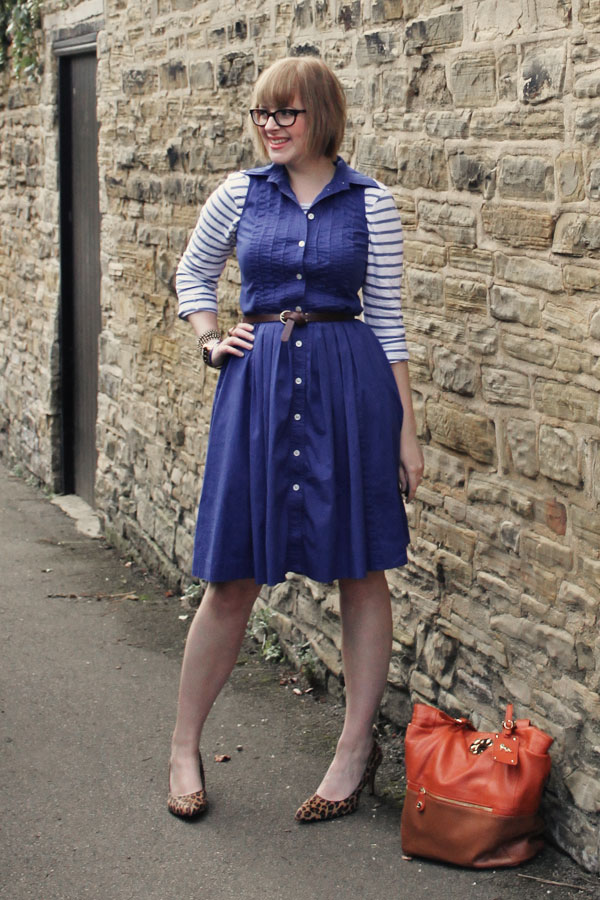 So, today’s outfit is inspired by Jess – I found the vintage Ralph Lauren dress in a charity shop and fell in love with its full skirt and cute collar. It’s a little big, but nothing a bit of belting can’t sort (my top tip for too-big bargains – belt ’em!). I paired it with a striped tee, leopard print heels and London Retro glasses I haven’t worn in ages for a quirky, girly look that I hope Ms. Deschanel would approve of.

Do you pick up style tips from the big screen? Which character has influenced the way you dress?

Oh no, the Buffy influence can’t be one you like looking back on! I’m actually more inspired by what i see real people on the street/bus/blogs wearing than TV characters.. not sure why.

Got to love jess’s style though, and just Zooey Deschanel’s style in general, actually x

New Girl – just love, love, love it! Jess as a character is just so endearing, definitely the sort of friend anyone would love to have a cuppa and a piece of cake with 🙂

Really like the blue of the dress, such a good shade. Yes, I completely had a bit of a Buffy phase: leather trousers and vest tops!

Simplemente sensacional!
I love your style.. Inspirations for today!
have a fun week!
xoxo from germany!
http://mariposa-world.blogspot.com

Omg yes! I can’t wait for this season’s New Girl! so excited! You look great! love your glasses!
*http://www.tinaciousme*

God I TOTALLY had a Blossom phase. My mum bought me a black velvet floppy hat with a floral corsage and I wore it ALL THE TIME!

I completely agree – style should be influenced by everything you experience, and grow much like your personality…

it’s very jess-ish! that dress was a great find and looks really good with the leopard print heels. And love the glasses – tortoise shell is my fav!

Ooooh, I love the way you’ve put the shirt underneath the dress! I know what you mean – watching films and TV always makes me want to dress like the characters :’) I adore your fringe, by the way! ♥

I love this outfit! And at least you’ll not have as long to wait for the second season of New Girl seeing as you’ve only just watched the first one!

Chanelling Zooey beautifully, and I love the glasses!

Ooh love this outfit, very Jess! Zoeey is one of my girl crushes too, her and Katy Perry but that’s kind of a given considering how scarily alike they look.

Glad I’m not the only one who’s only just discovered New Girl! Since watching it I’ve been really tempted to get a full fringe! Think you pull the Jess look off well xx

Love this post! I 100% agree I have a total girl crush on her atm and definitely considered a fringe and some glasses! I used to love Buffy too when I was younger I used to try dress like her (even bought leather trousers) and wore a purple velour buffy rucksack haha ever so stylish xx

You look very ladylike Jen, love it. The dress is a great shape on you.
I too tried and failed to dress as Buffy (including fluffy scrunchies – for shame!)
xx

I completely relate to this post with the dressing like your current favourite movie/tv series character (somehow i especially remember that Regina George phase from Mean Girls mmhmm)! I actually do go through the whole ordeal of “hmm what would ____ (insert current obsession) wear/do?” or “would _____ wear this dress”? Haha. Keep up the lovely posts please! 🙂

You look lovely, the dress looks beautiful on you. I genuinely can’t remember if I chose my clothes based on a character, I don’t think I have really. Perhaps I should! Everyone keeps raving about New Girl, I may have to watch it at some point x
Sirens and Bells

*groan* everyone goes on about New Girl and I just really really do not like it. What’s wrong with me?

I’m not a huge fan of the show but I LOVE Zooey’s style. I also went through a Buffy style idolising stage, and bought a corset after watching Moulin Rouge! x

How much fun is it to reminisce about past style phases!? I definitely had a My So Called Life phase, I was obsessed!

what a cute outfit! I love New Girl!

Love the blue with leopard print, such a cute dress! 🙂

I absolutely love your style so much, this is great!

When I was younger I was obsessed with Sabrina the Teenage Witch, and would wear loads of tiny clips in my hair, with choker necklaces (omg). x

This dress is amazing, you look adorable :)! And I’m in love with your watch. I would love to have one <3
If it goes about characters from TV… hmmm… I don’t know I think that models have such lovely styles (of course after work) and I really like the way how girls look like in Gossip Girl and Pretty Little Liars.
http://coeursdefoxes.blogspot.com/
http://www.facebook.com/CoeursDeFoxes

i LOVE jess!
i’m from englan and we’re still going through the first series. it had a break for a little while over here and i was so devastated because i thought maybe they’d axed it from tv over here so i was so relieved when it came back on.
i have a friend called rea who is EXACTLY like her, looks wise and all, she’s wanting to be a teacher. it’s uncanny!
anyway, you seem so nice so i hope to speak soon,
laura x
http://ilikecrayonsxo.blogspot.co.uk/

I share your silver screen inspiration, I too had a Cher (and I hope you mean from ‘Clueless’ the film not the ensemble-y challenged singer) phase that I’m not particularly proud of. Blossom was another short-lived phase. Gossip Girl (Blair) is still an inspiration now. I love kitsch clothes, darling dresses and there is something so endearing about dressing slightly doll-ish.

Great post, you have pointed out some superb details, I will tell my friends that this is a very informative blog thanks. http://imageclipping.net/about/

Finally got round to commenting on this post, also a HUGE Jess/Zooey fan, currently trying to make my wardrobe just like hers!! I was also a huuge Buffy fan, I begged my mum to get me a pair of £80 red leather trousers, luckily she never gave in!!