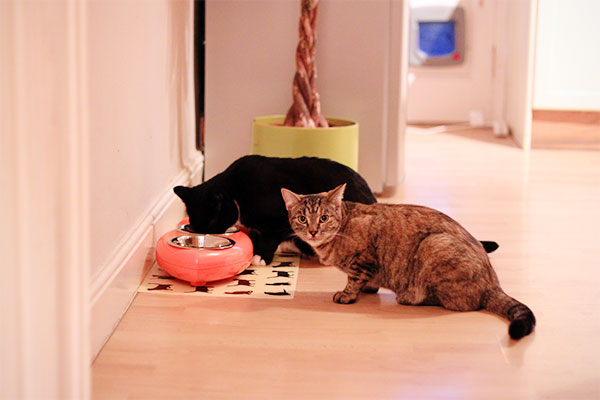 Just before Christmas, Rob and I moved into a new house. We upgraded a little – bigger house, bigger rooms, nicer area, cat flap. The move itself was relatively painless (although unpacking was a different matter) and we even managed to get a Christmas tree up… our cats, however, were less enthusiastic.

We have two kitties – Travis, our cuddly black-and-white fella who is entirely spoilt and often cradled like a baby, and Lilian, our skittish tabby with supermodel good looks and a butter-wouldn’t-melt attitude. They’re outdoor cats, King and Queen of the Street, used to the routine of coming inside every evening and sleeping on our bed. So moving them from their happy, settled lives in our old house has been quite a challenge. 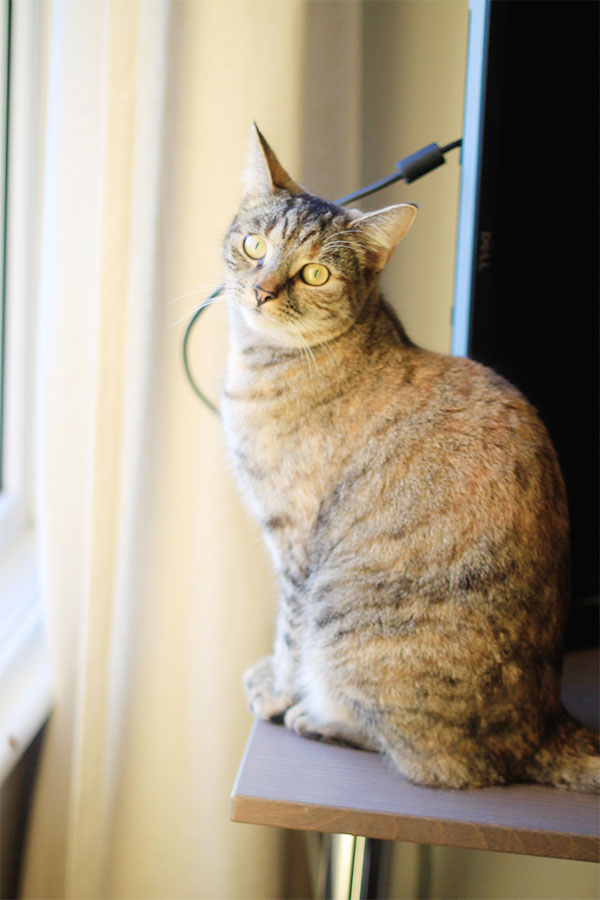 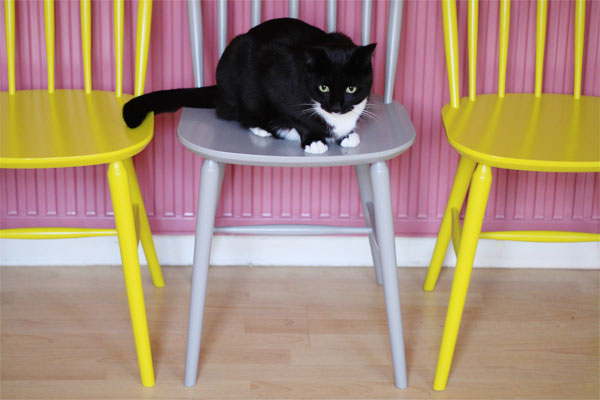 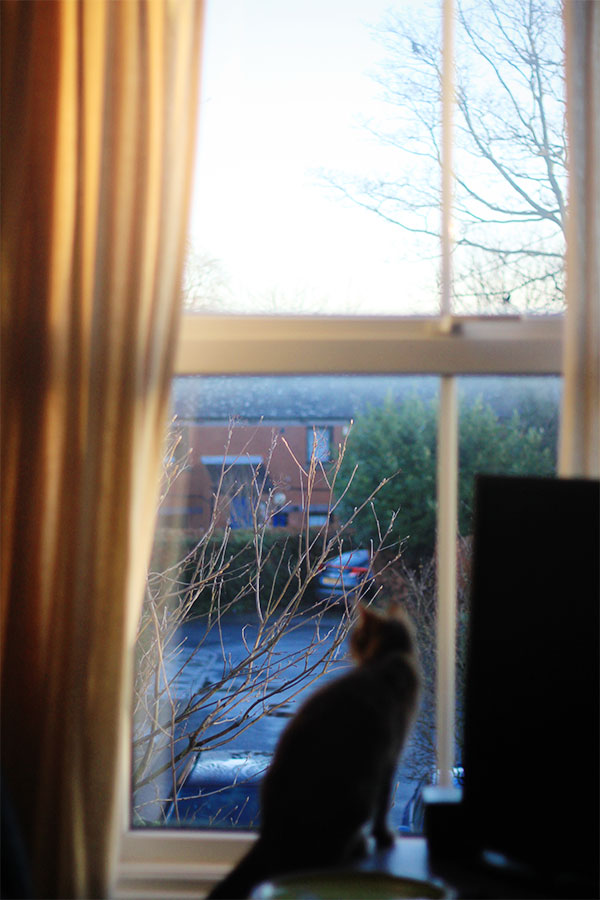 We were lucky enough to have a bit of crossover between the end of our old rental and the start of our new one. We let the cats outside while loading up our van – lots of hefting, banging and swearing is is surely very unsettling when you don’t understand what’s happening, so keeping them away from this meant they were blissfully unaware.

Similarly, when unpacking at the new house we left the cats behind and got all the big stuff in place. We then went back to the old house and slept there for two nights with the cats, before bundling them up in their carriers and introducing them to a whole new world. 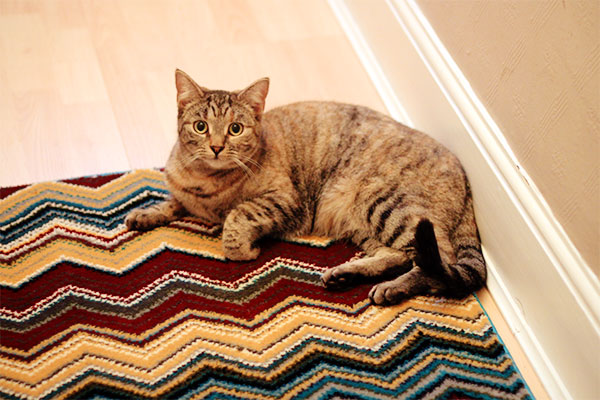 Our first few days in the new house were spent mostly in the living room – this was the only room fully set-up, and having a finished space without boxes and bubble wrap helped keep the cats calm.

Pets at Home kindly sent me some vouchers before Christmas, so I spent them wisely and bought a Feliway plug-in diffuser. The diffuser works by mimicking the natural pheromones cats produce when they feel safe and secure, creating a sense of calm and wellbeing. We set up the diffuser in the living room and kept the cats in this room until the rest of the house was more organised. 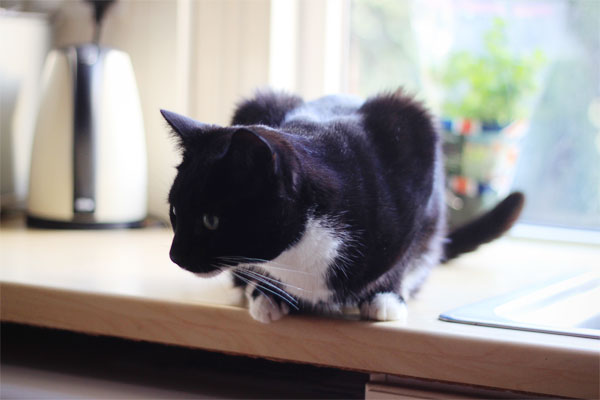 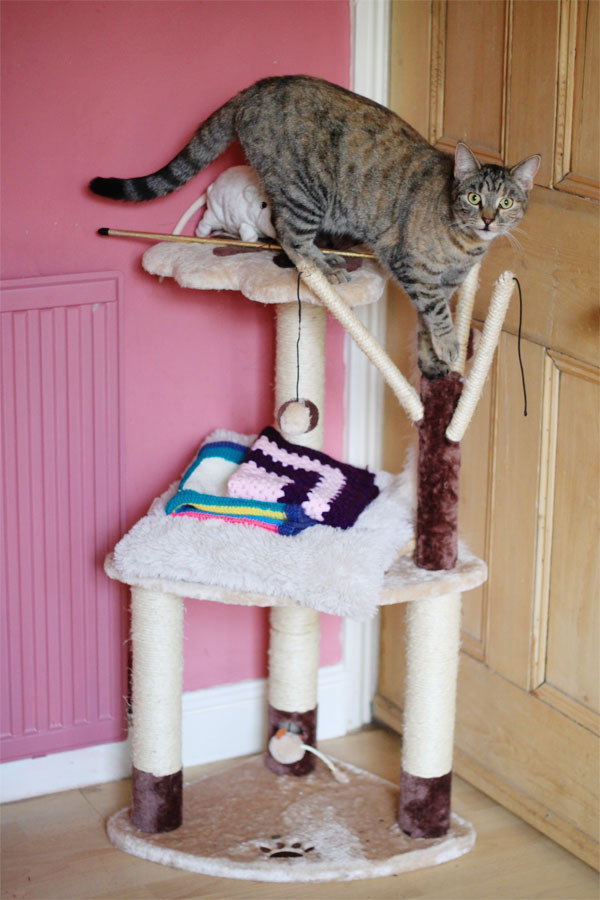 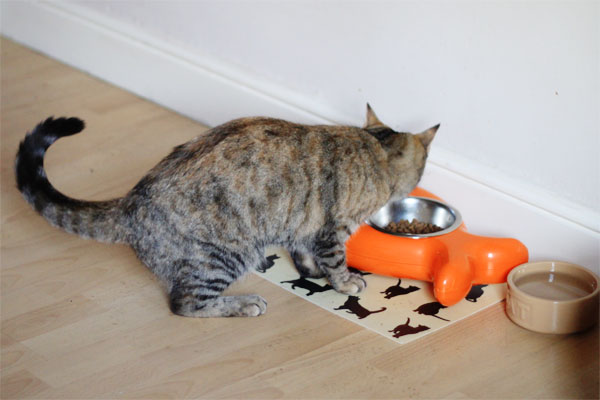 With the Feliway in place, we started making the rest of the house more cat-friendly. One of the main problems with moving cats is the sense of ‘newness’ – new furniture, bedding and carpets are just as confusing as new surroundings. We got a new sofa when we moved, but we kept cushions and blankets from the old place so the cats could pick up their scent, even in an unfamiliar environment.

We also created ‘Cat Corner’ – using our vouchers, we bought this Kitty Activity Centre (highly unattractive but they love it) and covered it with blankets and toys they’re used to. 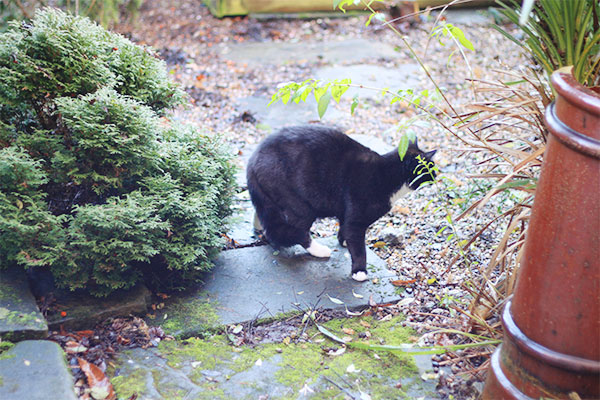 We kept Travis and Lily inside for three weeks before letting them roam free. Before we moved they spent most of their time outside so keeping them in was very difficult… we had a number of ‘dirty protests’ which were NOT pretty. So after three weeks, when they were climbing the walls and trying to sneak past us at the front door, we unlatched the cat flap and watched as they made their first ginger steps outside.

They’ve been going outside for a week now and it’s slow process, but they’re getting there. Lily is a timid lady so she’s still not sure, and Travis has had a few yowling conversations with the cat next door, but they’re getting braver and going further. Give it a few more weeks and they’ll be King and Queen of the Street again.

Have you ever moved with cats? Any tips to share?

Never moved with cats, and never really thought about how hard it mist be! i remember when i was younger, we had a cat, and my mum always said if we ever moved with her, we should put butter on her paws and apparantly that makes them feel more at home!?!?! hahaha i doubt thats true but there you go! 🙂

I moved from Manchester to Brighton with two cats a couple of years ago, that was pretty traumatic! They yowled most of the four hour car journey which was awful. Once in the new house we set up a room for them with home comforts as you describe, and also let them out after three weeks. Took a while to readjust but they couldn’t be happier now.

can just about imagine how hard it can get! wouldn’t imagine moving with my cat!

I’ve moved FIVE times with Lily now and Feliway is my saviour! That and I think she is quite an adaptable cat anyway, despite being quite timid, she has always settled in really quickly. I can also recommend moving their litter tray with old litter inside rather than emptying it, its a bit gross but I just wrap it in a bin bag and make sure it stays flat. Its the letting her outside that I’ve always worried about most, but again she’s been amazing, even when we had to move temporarily out of our flat in Meanwood to a place in Armley for a month after a week I let her outside and she knew where to come back!

Your cats are so cute Jen! We moved house a few summers ago, and it was SO warm, we had no choice but to leave the patio doors open about an inch. My cat somehow managed to squeeze his body through this miniscule gap and made his escape. We went outside, calling him and shaking his biscuit tin, and all the other neighbourhood cats came running (but not him, of course). He eventually made his own way back the next morning, cool as a cucumber.

Not yet, but I’m dreading the move when it comes. I have two very very timid cats that absolutely hate anything and anyone new.

I moved with my cat Misty and she was really well behaved which was great and we were able to let her go outside just a week after moving. But we did have a few problems with other cats and one neighbour who didn’t like cats, but after around 3-4 months she settled in nicely =] xx

This is a great post with some great advice. I’ve usually waited about a week before letting mine out but will supervise them for a good week after that. I’d really like to try one of those Feliway diffusers, just in a hope that my skittish cat won’t be so moody about me touching her sometimes.

They’ve both been much more loving since we’ve had the diffuser – would definitely recommend it for all year round and not just for moving!

They’re so cute – you’ve captured some lovely photos of them – that plug-in is such a good idea! Think I’ve moved before with a cat and it adapted quite easily, always finding its way back 🙂

Three weeks is amazing to have kept them in for! When Mum moved house with our since-departed black cat Toby she managed to keep him inside for about an hour. He was shut in the bedroom with food, litter tray etc but it only takes one person to forget to shut the door and one very determined cat that wants to explore his surroundings…!

They both look happy in their new home. Congrats on the move

I love your cats 🙂 They are adorable and look like they are settling in great.